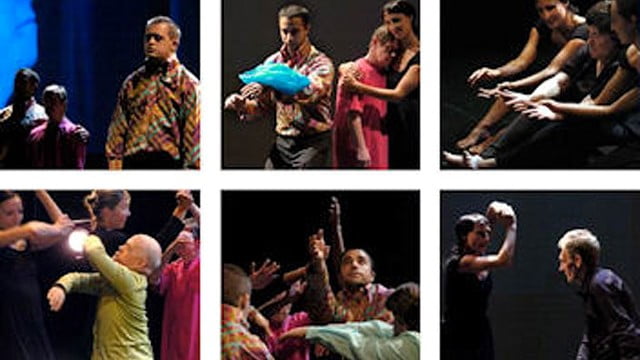 Live Perfomance – a collaboration with the Gelabert Azzopardi Companyia de Dansa and the Edinburgh International Festival.

Janice’s main motivation for what eventually became Arthur’s Feet was to change the context in which learning disabled performers were recieved and witnessed – change the context and you change how audiences recieve the work and the people creating and performing it, so she approached one of ‘the highest’ contexts that was possible at the time. At that time EIF were offerring professional development workshops for arts professionals with some of the most exciting artists in the world who were appearing in the Festival. Janice’s initial approach was to ask EIF if they would consider doing the same for experienced learning disabled adults. Right from the outset the Edinburgh International Festival (EIF) were interested, supportive and excited. They suggested the artists and after meeting Cesc and Lydia in Barcelona the plan was hatched to create a week long residency at The Hub, EIF, headquarters in Edinburgh. Janice then invited dancers she had worked with over the years – 12 in total – all experienced and dancing either with traveller dance, Independen-dance or Lung Ha’s Theatre Company. The week went really well and from there the plan was made to invite Cesc and Lydia to make a collaborative piece with the learning-disabled dancers from Scotland and the dancers from the Gelabert Azzopardi Company de Dansa. That is when Arthur’s Feet was born. Performing in the context of EIF was a first for disabled performers – a milestone. The only regret was that their were so few performances and so few people saw the work. But, still, magic and history were made and a glass-ceiling of expectation was shattered.