There’s Something You Should Know 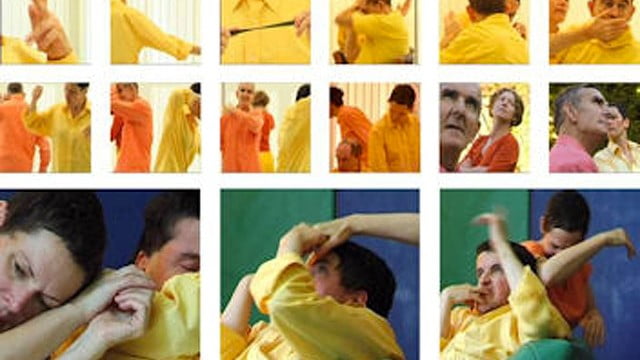 “A compelling portrait of how we are. Demanding, fragile, playful…here is something we should all know and understand about each other”

We made this film over the course of a week following a series of regular year-long weekly workshops. By the time filming happened we, the dancers, all knew each other well. During the week we improvised and played with the movements and moments of dance that we had already created and worked on together. We knew what each dancer loved and what things in movement were signature and essential moves. We filmed in different rooms and places in the building both indoors and out in order to reflect and reveal each dancer in their essence. Then we went with the flow – no story board – a simple and exciting following of where each dancer took us.  In many ways the making of the film was a boundary-pushing experiment. Would the dancers have the desire to be filmed and a love for the camera or would the camera be ignored or pushed out of the way? Would we capture enough footage? Would the moments of beauty, the small intricate self-directed improvised movements and moments of connection between people be filmic enough and make a cohesive whole?  The edit was done, deliberately, by someone who did not know the dancers nor had any attchment or preconceptions. It was important that the had all the signatures and hallmarks of a Goat film – leading exponents of dance and moving image works – and that the film stood up to that scrutiny. Not everyone made it into the final film. Some of the dancers landed on the cutting room floor! That was tough and discussed a lot. What we did in the end was also to create a private, personal use, document film – equally good and valuable but with a different aesthetic to it.  Moving the film into Goat’s context and giving them copyright was an important political move for disability-led work at that time. Also, there was controversy and questioning that doubted the dancers autonomy and agency in the making of the work, the presenting it to camera and their feelings about it and connection to it once it was completed. Wow! It just shows societeies limited and limiting pre-conceptions and projections onto adults with complex-learning disabilities. Everyone, but everyone, was fully on board, proud and committed to the work, in their own way – of course!

There’s Something You Should Know has been recognized as an innovative and challenging example of its genre and has been selected for screening as part of a number of high-profile international curated screen dance and video art programmes including Traverse Theatre as part of ‘In Transit’, a Scottish Arts Council study-day on Arts and Disabilities (21/06/05) and as part of curated programmes: at the Rotation 2005 Festival at the Kiasma Theatre, Helsinki, Finland (18/10/05); New Territories Festival at Tramway, Glasgow (8-12/02/06) as part of the CRATE ‘Captured: Performance to Camera’ programme (curators: Lei Cox and Pernille Spence) also at Threshold Space, Perth, Scotland (27/10/06); at the Opensource: (videodance) conference (18/06/06); the Ultima Film – Dance for the Camera Festival in Oslo, Norway (01/10/ 2006) and the Video Danza Festival International Festival de Buenos Aires, Argentina, (28/11/2006); Reelmoves Dance on Screen Festival, Sydney, Australia, (16/05/2008), as part of international artists screening; Dance Camera West ‘Screendance: a new visual language’ programme, Los Angeles, USA, (5 & 6/06/2008), ‘Screendance: State of the Art’ Festival, as part of the American Dance Festival, North Carolina, USA.

The film also features in Katrina McPhersons Making Video Dance: A Step-by-Step Guide to Creating Dance for the Screen is the first workbook to follow the entire process of video dance production: from having an idea, through to choreographing for the screen, filming and editing, and distribution. In doing so, it explores and analyses the creative, practical, technical, and aesthetic issues that arise when making screen dance. Published by Routledge on the 11th September 2018, the second edition of Making Video Dance is rigorously revised and brings the book fully up to date from a technical and aesthetic point of view.

More About the film-maker's →
Posted in Other Works, Works.